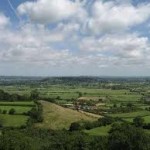 Glastonbury, a small town in Somerset, England, is likely not on most people’s ‘to do’ lists when they cross the channel; however, it’s a magical place, rich in history, myths and legends.   Well worth a visit, and you can combine it with a trip to Stone Henge.

There are traces of civilisation in this area dating back to Neolithic times (5,200 and 4,500 years ago!), but in more recent times, the settlement of Glastonbury was recorded from the 7th or 8th century.  Glastonbury Abbey, which dominated the town for 700 years, was one of the most important abbeys in England and was the coronation site of the Edmund Ironside as the King of England in 1016 and visiting the ruins is like a step back in time.  The Abbey claims to be the oldest ‘above ground’ Christian Church in the world.  In 1191, monks at the abbey claimed to have found the graves of the famous King Arthur and Guinevere to the south of the Lady Chapel of the Abbey Church – and in some literature Glastonbury is identified with the mystery island of Avalon.

The second legend involves Joseph of Arimathea, who it is said, arrived in Glastonbury by boat over the flooded landscape.  On disembarking, he struck his staff into the ground and it flowered miraculously into the Holy Thorn, which became a pilgrimage site during the Middle Ages.  According to myth, Joseph requested the construction of the Abbey to house the Holy Grail after the death of Jesus.  Legend has it that Jesus also visited Glastonbury with Joseph.

Glastonbury has been considered a spiritual centre since the megalithic era, and now attracts fascinated tourists and the ‘new age’ crowd.  This quaint town is nestled in the green, rolling hills of the Somerset countryside, in the lea of the famous Tor, which is topped by the remains of an old church and once a Mecca for Druid Priests.

Glastonbury is a festival town, with plenty of arts and music events taking place during the year; and a great place to spend Summer Solstice.