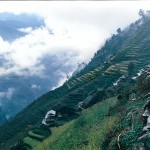 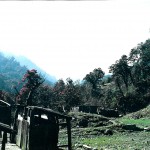 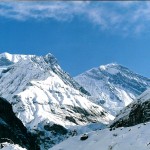 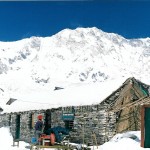 Years ago, I managed to convince a couple of my friends, Jon and Mike, to go trekking with me in Nepal.  We left England in May bound for Kathmandu, and then jumped onto a bus to Pokhara to start the Annapurna Basecamp/Jomson Trail. My first piece of advice for readers – have an open mind when travelling in Nepal – and dispel any pre-conceived ideas you may have about public transport.  There didn’t seem to be any schedule for the buses – they just turned up now and again.   We started the six hour journey inside the bus, along with the chickens and goats, but after a few hours of the bumps and potholes we decided to join some savvy locals on top of the bus as we figured It was probably safer (albeit very dusty).  This trip can take up to eight hours, depending on the conditions of the road.

Nepal is home to spectacular mountain scenery, and some of the best trekking in the world – which is why we wanted to see it before they start building roads, 4-star hotels and escalators up the mountains.  It’s also a fascinating mix of Hinduism and Buddhism t religions where you’ll see ancient temples, and monasteries containing artifacts from both religions.  Against the majestic backdrop of the Himalayas,  all the hillsides are beautiful cultivated for crops and you can always find locals who seem to be travelling from no particular direction to no particular destination.  It’s amazing – these people have absolutely nothing, but they seem happy and are incredibly friendly.

And so we set off into the mountains  – just the three of us with backpacks, armed with a guidebook which gave us an idea of which direction we were supposed to be headed, but was a little vague on the details.  We carried neither a tent nor food as we had read up about the teahouse lodges along the way, and we felt that by sleeping and eating with the locals we were both contributing to the economy and learning about the culture of these hardy mountain people.  The lodges only charge between $1 and $4 per night.. but don’t expect running water or electricity (less than 10% of Nepal has electricity.  It was a fantastic experience – we got lost, got caught in thunderstorms and torrential rain, and suffered the inevitable tummy bugs, but I thoroughly recommend it to any adventurous readers out there.

Another tip about the teahouses – the menu looks familiar, you’ll think you know what you’re ordering, but nothing tastes like anything you’ve tasted before ;-).   You can get Pepsi and 7-Up right until the basecamp – but the price gets more expensive the higher the elevation.  I ate dal and rice, and tea (which always comes with milk and sugar by the way) for most of the three weeks.

Best to get some training in before arriving!  Trails are good, but can be steep.  If you are not used to carrying a backpack, you might want to consider signing up for an organized trek (porters will take your main bag and you will just carry a daypack).

Check out the best times to go below .. try to avoid Monsoon season (we thought we had hit it for a couple of days!).  Be prepared for everything .. and if you are going to higher elevation, take warm clothing.  We were fully clothed in our sleeping bags at base camp – and still shivering!  Invest in a good down jacket and a minus-20 sleeping bag!

Lonely Planet has a really good website/guide for trekking in Nepal so check out the link.

Best time of year to go:

Fall: September to November and Spring: March to May

Be prepared for everything – we went through lush rain forests, over dry savannahs to snow and below -10 at the base camp (4130 metres above sea level)