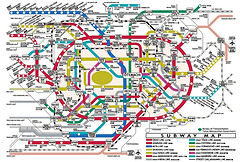 Originally founded as a small fishing village in 1457, Tokyo is now the largest metropolis in the world with almost 35m people .. but surprisingly enough, it just works!  It moves at a fast pace, with an almost obsessive energy and is a unique melting pot of old and new.  While the people embrace the latest fashion, technology and architecture – the city remains true to its roots.  Fashions come and go, cell phones and computers are constantly upgraded and traded in for the latest model, and yet behind all of this, the history and traditions remain strong.

The subway system is so efficient, clean and punctual that it puts most city transit system to shame!    I would put it on par with Switzerland, but carrying far more people of course.  The subway carries over 8m people into the city centre on a daily basis, and almost everywhere downtown is within a 5 minute walk of a station.  If you visit here as a tourist or on business, the subway is definitely the way to go.  From Narita airport, you can now buy one-day and two-day Tourist Metro cards.  To travel to other cities, use the shinkansen – or bullet train.   Buying a Japan Rail Pass before you arrive is the cheapest and most convenient option.

‘Must sees’ in Tokyo include:

When I was there, I went to a neighbourhood sentō (public bath) – which is a huge ritual in itself, and quite an experience for the unsuspecting tourist!  Needless to say, you emerge feeling extremely clean, and realizing that you should actually wash down BEFORE bathing!

If you really want to experience, taste, touch and feel the culture, spend at least one night in a traditional Ryokan, a Japanese-style inn.  Learn a few words of Japanese before you go – very few of the staff speak English, but this adds to the authenticity.

I’ve loved the few times I’ve been to Japan, and would recommend it to anyone.  Tokyo can be a little overpowering when you first arrive, but it’s fascinating, and the energy is addictive.  People are great – and will go out of their way to help you.

As always, Lonely Planet has a great city guide for Tokyo: http://www.lonelyplanet.com/japan/tokyo