It was the trip of a lifetime – taking the almost 8000 km train ride from Moscow to Beijing had been on my bucket list for who knows how long!  I had talked about it, read the Trans Siberian Lonely Planet Guide, researched it on the net .. but somehow never actually got around to doing it .. until one of my friends mentioned that it was on her bucket list too!  Two other people decided to come along for the ride .. and then we were set.  Four is a perfect number for the train, as the second-class ‘kupe’ compartments have four berths.  Going third class is also an option if you are on a budget, but they are pretty cramped, and we were quite happy not to have booked them.

We decided to book the rail tickets through a Russian travel agency based in London, Real Russia, as they have great reviews on-line – and without speaking the language, we thought it would be too difficult to try to book tickets directly with the Russian Railway company.  Also, the Russian Railways only release tickets around a month before the travel dates, and apparently they sell tickets to the agencies before selling to the public .. another great reason to book through an agent.  We put our request in with the agency way ahead of time, so we were at the top of the list when they block booked space on the trains! Of course, you can book the whole tour through them or through another agent, with stop overs, accommodation etc – but its a lot more expensive we thought this would take the fun out of it.  Just a note – it’s quite complicated booking trains if you decide to do stopovers (recommended) as there’s not just one train that does this route .. you travel on different trains, and they all run on different days of the week.  For instance, to get from Ullan Bator to Beijing, there are trains on Sundays and Wednesdays .. that’s it!  So you need to plan your trip accordingly.

So, we decided on our stopovers.  We had limited time, and wanted to spend a few nights at Lake Baikal and in Mongolia, so we decided to stop in Ekaterinburg, Irkutz (for Lake Baikal) and Ullan Bator (Mongolia).  However, if you have more time – start in St Petersburg, which is a beautiful city with one of the best art galleries in the world. Spend a few days in Moscow (don’t forgot to see Lenin’s tomb), go to the Bolshoi Ballet, and then stop over in Kazan (apparently well worth a visit), Novosibirsk, or even a small city like Tomsk (we met one person who stopped there and really enjoyed it).

We booked the majority of accommodation on airbnb, including the yurt on the yak farm in Mongolia (which was amazing .. highly recommended).  In a couple of places we did stay in hostels, which were a great option, and they had rooms for four which worked out perfectly.  Accommodation was generally very cheap (around $20 per night per person) and meticulously clean. 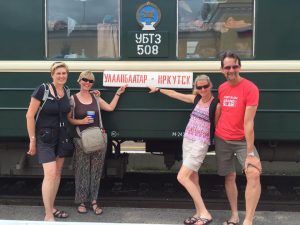 The train journeys were epic!  Our longest one was 55 hours (3 nights) and funnily enough, it went quite quickly.  I would suggest arming yourself with packs of cards, vodka, books to read, food and lots of bottled water.  Hot water is plentiful on the trains, so bring tea bags, but there’s no drinking water.  Generally in Russia, Mongolia and China, you don’t drink the water (and, as a side note, you don’t put toilet paper down the toilet as the systems can’t handle it).  Within Russia, on the trains, we were generally the only non-Russians and the ‘train stewards’ designated to our carriage weren’t too sure what to do with us, especially as they spoke no English. Needless to say we became very good at charades.  Border crossings are EPIC!  You’ll never complain about immigration line-ups at the airport again! Our first crossing into Mongolia took 9 hours, and our crossing into China took around 5 (but this included taking the train into a warehouse to change the bogeys as the railway tracks are a different width). 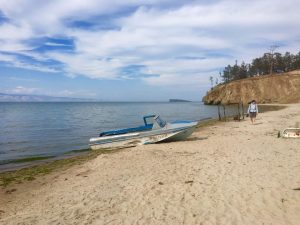 Lake Baikal was stunning!  We spent three nights on Olkhon Island, in the middle of the lake, and it was incredibly beautiful.  There’s no running water on the island, and the main city, Khuzir, is like the wild west – dirt roads, shared by bikes, cars, and cows.  The sandy beaches go on forever, and the Russians like to camp by the shore.  This lake is the deepest and oldest lake in the world, and holds 22% of the world’s fresh water!  Apparently there’s a resident monster (like the Loch Ness Monster), but we didn’t see him.

Mongolia was a highlight.  Only 3 million people, and 70 million animals .. it goes without saying that they are big meat eaters and suspicious of vegetarians.  The people are friendly, and living on a yak farm for a couple of days was a totally unique experience.  We didn’t have time to go into the Gobi desert (although we did go through some of it on the train), but we’ll leave that for another trip.

Beijing is fascinating!  A country developing so quickly that as soon as they print a map, it’s out of date.  A really interesting mix of history, and old buildings, and state-of-the-art technology and construction.  It’s easy to see why China is such an economic powerhouse and are well on their way to becoming a super power.  Why isn’t everyone learning Mandarin?

Four of us (three from Vancouver and one from the UK) set off, for a pan European/Asian adventure.