Sara MacKinnon won a conservation trip donated by Travel CUTS at the Spring 2012 Study and Go Abroad Fair, and she decided to go to Costa Rica on a turtle conservation project. 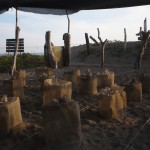 The hatchery at sunset 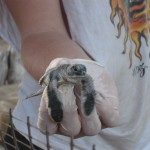 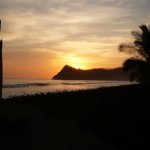 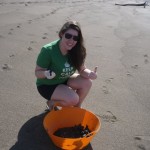 Living on a beach with no running water, no electricity, in a country where you don’t speak much of the language was definitely a shock at first. However, once I met the incredible people I would be living with, people from all over the world (France, the U.S., Switzerland, Germany, even Iceland!), I knew it was going to be a great adventure! Every morning I woke up under my bug net to the sound of the ocean 100 meters from my bed and, some mornings, the howler monkeys woke me up too (Google the sound a howler monkey makes. I dare you to try and sleep through that!)

The highlight of my trip was our second to last day on the beach. We hadn’t seen many turtles yet and, given that it was the off-season for the turtles to be laying eggs, I had kind of conceded that I just might not have the opportunity to see them. Our volunteer duties included working in rotations to check the hatchery every 15 minutes and that day I learned why.

In the 15 minutes between my partner checking the hatchery and my rotation, 5 little turtle heads had
poked their way out of the nest. By the time my partner brought over the bucket of wet sand for the babies, another 5 had come out. Before I knew it we had filled the first bucket with over 30 babies and, by the time all of them were accounted for, we had nearly 60 babies! After weighing and measuring the first 10 out of the nest (ASVO Sea Turtle Conservation Project is a research project, so the first 10 babies from each nest have their weight and size recorded for research purposes), we took them back to the place on the beach where they had originally been laid (the exact location is recorded when the eggs are first collected).

Releasing them was an incredible experience! We weren’t allowed to touch them or help them along after setting them on the beach – we had to let nature take its course. One little guy was at the back of the pack and just as he was getting to the edge of the water, he slipped onto his back! We sat there for 10 minutes watching and hoping, fingers crossed, that he would get back on his feet and make it in. After the longest 10 minutes of my life he made it and was swept away by the waves into the ocean. Amazing!

I can’t express enough how grateful I am for this experience. The things I saw, the people I met, and the experiences I had were all so incredible and I am so thankful for it all!

I’ve attached a few pictures: one is of when I got to release some newly
hatched babies that we found when we excavated (dug up) a nest and then
released during low tide, another is a shot of the hatchery at sunset (it was
the off-season for egg laying, so there were only about 15 nests at the time.
In peak season there can be upwards of 200 nests). The third picture is the
view from the camp of the beautiful Costa Rican sunset (which, in February,
only last about 15 minutes), and the final picture is a close up of a green
turtle, which is one of the species ASVO rescues. There are so many more that
I’d love to share, but I tried to pick the highlights (mostly the locale and
the turtles!)