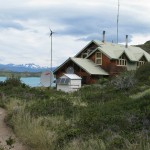 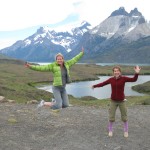 Surprisingly unspoilt, Torres del Paine is Chilean Patagonia  – and you can either get a bus there from Santiago (Chile), or from Argentina.  The regular buses from Calafate to the national park are super-busy in peak season – December to March – so book ahead.  We turned up at the bus station the night before to book tickets and both companies were full – both leave at 8am for Puerto Natales (just over the border in Chile) .. you then need to take another bus to Laguna Amarga at the entrance of the park and then yet another bus.  However .. in the end we went with a tour company, Always Glaciers, which goes all the way to Laguna Amarga (way more convenient).  It’s a little more expensive, but well worth it as it’s much quicker and also allowed us to spend an extra night in the park rather than have the forced stop over in Puerto Natales.

The classic hikes if you have time are the ‘W’ hike which is 4 or 5 days, or the ‘O’ which is about 10 days.  We had limited time, so we did the two outside legs of the ‘W’ which were spectacular!  We spent 3 nights in the park – two nights at the refugio (hostel) at the base of the ‘Torres’ and one night at the Gran Paine hostel.  The hiking is amazing .. trails are well marked, the paths are pristine (no litter anywhere) .. and views are spectacular.  We didn’t meet a lot of people but apparently we were not quite in high season, so Jan/Feb may be busier months.  The refugios are in the middle of nowhere (you need to take a ferry over to Gran Paine), but are great – and they accept US$ as well as Pesos (there are no exchange places in the park, so this is a plus).   They cater for all meals (as long as you book in advance) – but if you want to save some $$ and make your own food, just a note that there are no supermarkets in the park.  We had fantastic weather .. but we were lucky, be prepared for everything .. it can be very windy, and can snow in the middle of summer.

Look out for wildlife .. ton of guanacos everywhere, and you’ll probably see a few ostriches as well.

The border crossing is quite uneventful – you go through the Argentinian departure hut (where they pay someone to manually write out information on all the cars going through) to Chilean arrivals (very high tech .. they even scan your luggage!).  Just a note .. the Chileans are very strict on bringing in foodstuffs, especially fruit.

Would have loved to spend longer in the park, but 3 days was great to have a taster.  Glaciers are impressive, beautiful scenery, great hiking and we met some really interesting people (including one Japanese girl who was travelling by herself for 3 months and spoke no Spanish and just a few words of English.  It didn’t stop her communicating though!).