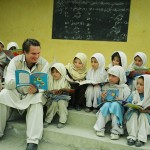 Greg Mortensen’s philosophy is not complicated.  He believes quite sincerely that the conflict in Afghanistan will not be won with guns and air strikes, but with books and pencils.  The future of the country depends on educating the children, especially the girls.  Despite threats from the Taliban and other extremists, Greg, with a small team of dedicated staff,  is building schools in the most remote and war-torn areas of the country.  He believes in the power of education, especially for girls (not an easy task in a culture that usually keeps girls out of school).

Greg’s first book – Three Cups of Tea – is still a best seller and is now required reading for the Pentagon, as well as for aprox 80 universities in the US.  The Pennies for Peace project, founded by the Central Asia Institute, has expanded to include aprox 4,500 schools, including many in Canada.

Both this and his latest, Stones into Schools, are both fascinating and inspirational to read.  They give a unique insight into the world’s most remote locations, and the culture of the people who carry on with their lives under unimaginably difficult circumstances. The stories are inspirational and filled with the heart-warming message that there is hope for political stability and religious tolerance through education.

Girls’ education leads to increased income for the girls themselves and for the country. Increasing the share of women with a secondary education by 1% boosts annual per-capita income by 0.3% (source: The Council on Foreign Relations ‘What Works in Girls’ Education: Evidence and Policies from the Developing World).

The better educated the women, the lower the infant mortality rate.

Educated girls and women are more likely to stand up for themselves and resist violence.

If you are a student or a teacher – get involved in the Pennies for Peace project and make a difference.  Every penny counts … 1c can buy a pencil; $1 per month can educate a child in Pakistan or Afghanistan; $1.50 per day can pay a teacher’s salary.

Go out and buy Three Cups of Tea and Stones into Schools – both available on Amazon.com.   I loved both these books and you won’t be disappointed!