Touch down in Singapore – Maria Church 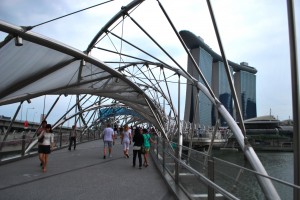 Well, I’m here! First impressions: hot. Luckily I arrived very early in the morning so there was no direct sunlight to warm the already hot and humid air. From deep winter in Ottawa to the summer of Singapore after a mere 24hours in transit; there has got to be a faster way to get to the heat! Ahh, but cards on the table, I chose to come to Singapore because my brother has been living here for the past school year. He is currently doing a co-op with a tech company based in Japan (undisclosed company – think TV’s and DVD players). The best part of staying with a relative or friend is that the first night, when you are exhausted from travel, have a questionable appearance and smell, you don’t have to worry about navigating to a hostel or hotel. That night was a short but important power sleep as the sunlight arrived quickly in all its fiercely hot glory.

The bulk of today was spent getting to know the vibe of the city and staying out of the sun as much as possible. I have heard that heat stroke can be a problem if you aren’t use to the hot climate right away. Fortunately the city is a shopping mecca. We wandered from air-conditioned shopping mall to air-conditioned shopping mall. Lots to eat, lots of people creeping to be done! I have learned Singapore is a one of the more multicultural cities/countries in SE Asia. In respective order of population size the four major cultural groups are Chinese, Malay (original), Indian and other. I was surprising far from the only blonde wandering the streets though our visiting today was limited to tourist areas.

As promised I will be profiling my first international student soon. Estimates differ but I have heard that as many as half of the people here are either foreign born or non-citizens of Singapore so it shouldn’t be too hard for me to find a subject. I’ll keep you posted!