From Switzerland to Singapore – blog post by Maria Church 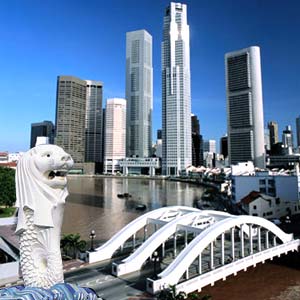 Short and sweet bio: Rachel decided to move to Singapore from her home in Switzerland when she was 20 to work for her father’s German based construction company. Her original plan, she says, was to work for two years then go back home to university. It has now been more than eight years and Rachel contintues to live overseas. After two years living in Malaysia she chose to take her university undergrad in Singapore, majoring in psychology and human resources. She met her soon-to-be husband Jeevan abroad and is now busy planning three weddings; one in Singapore, one in Malaysia and one in Switzerland.

What made you decide to work overseas? Rachel explains that her father offered her a position with his construction company’s foreign branch in Singapore when she was 20. “I had the chance to work abroad so I said ‘when do I leave? I will pack my bags!’ She says the plan was for her to stay only two years with the company and then return home. She laughs saying “look how that worked out, eight years later and still here!”

What was it like leaving home so young? “I came here at an age where your character isn’t developed fully,” Rachel explains, “you are kind of like a sponge.” At first she was very wary about offending the locals, “I was still young and maybe a little culturally sensitive.” This changed quickly though which she attributes to the fact that Singapore is a place where many cultures live together and foreigners are frequent visitors. “People rarely take offense, they are just so used to it.”

Was it difficult fitting in? Rachel says it was really helpful that she already knew English coming to Singapore. Her native language is German but in Switzerland they are taught English at a young age. “It can be scary because things are different and different is always scary.” As an example she recalls the first time she was invited to a Malay wedding. “I thought, I’m scared! I don’t know what to do, I don’t know how to behave!” After a couple moments of panic she started to relax and observe the people. In the end she says the experience was fascinating.

What does it take to be a good international traveler? The most important thing, Rachel says, is to be flexible. “Things often don’t go as planned. You will most likely get to the end goal but you will probably go a different way than you expected.” Rachel calls herself a “confirmed seat junkie” explaining that just because she is not a backpacking, dreadlocks sporting traveler doesn’t mean you are restricted to all-inclusive resort style traveling. While she likes to plan her trips around the goal of a hot shower and a clean bed at the destination, she is comfortable with changing plans and unexpected complications.

My thoughts: Rachel really has made a life for herself outside of her home country. She calls herself a SBS, Singaporean born Swiss. When she made the decision to travel to Singapore at age twenty she admits that there was that initial fear of the unknown but assures me that it is all part of the experience. It was interesting to hear her recall mistakes she made or concerns she had when I can relate to so many of them. Seeing how she has grown from it into the person she is today is beyond encouraging for those of us who are just starting out!